Less help on the farm and a busy workload sparked Con McGarry, a sheep and suckler farmer from Co Roscommon, to invest in a sheep handling unit to help reduce his workload.

Con keeps 200 Suffolk cross sheep, a mixture of breeding ewes and dry hoggets, that he purchases as ewe lambs, along with 30 suckler cows.

The springtime workload is heavy for this one-man operation.

“I had two outfarms with no permanent handling facilities on them and my sons were working away from home, so I looked into buying a mobile sheep handling unit to make life easier,” explains Con.

He had never previously owned a specialised handling facility, but because he is involved in sheepdog trial competitions, he had used different types of handling units and realised they had benefits.

Con decided to buy a mobile unit this year to enable transportation from one farm to the other and he purchased a Shepherdsmate sheep handling system. 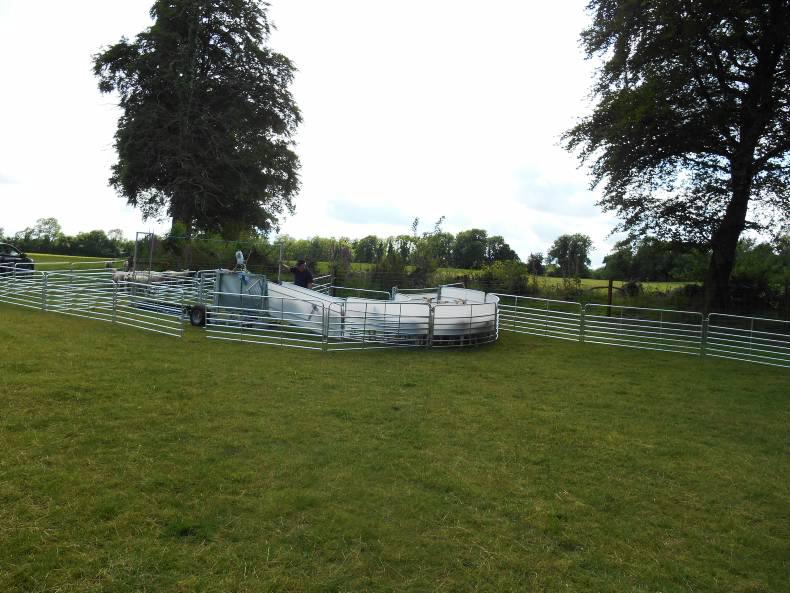 The entire unit that Con bought includes 22 regular, galvanised 8ft factory-welded sheep hurdles that are used to make up a funnel to entice sheep into the unit, and a number of pens for drafted sheep. There is a forcing pen with a swing and slide gate, a race, the main handling unit, a three-way one-lever-operated drafting gate and a footbath with exit gate operated by the controller.

The whole unit is attached to a chassis for ease of transportation. With the help of his dog, Tara, Con drives the sheep into the first large pen. They are then easily funnelled into the forcing pen. 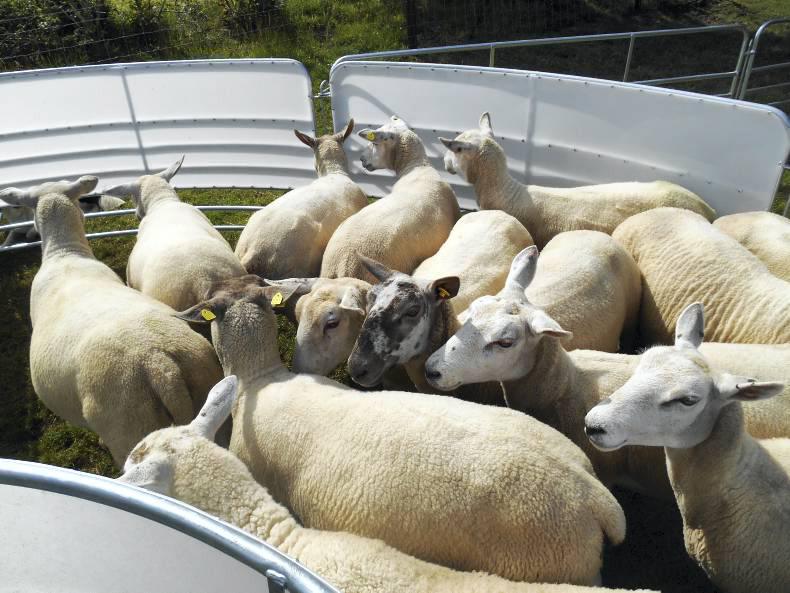 Con says the forcing pen works well because it is sheeted with a polypropylene plastic covering, which limits the ewe’s view of what’s ahead, enticing her to run up the race. He believes that the circular shape also helps to entice the ewe to move. A sliding gate can be moved inwards as the group size gets smaller to keep the flock moving up the race. 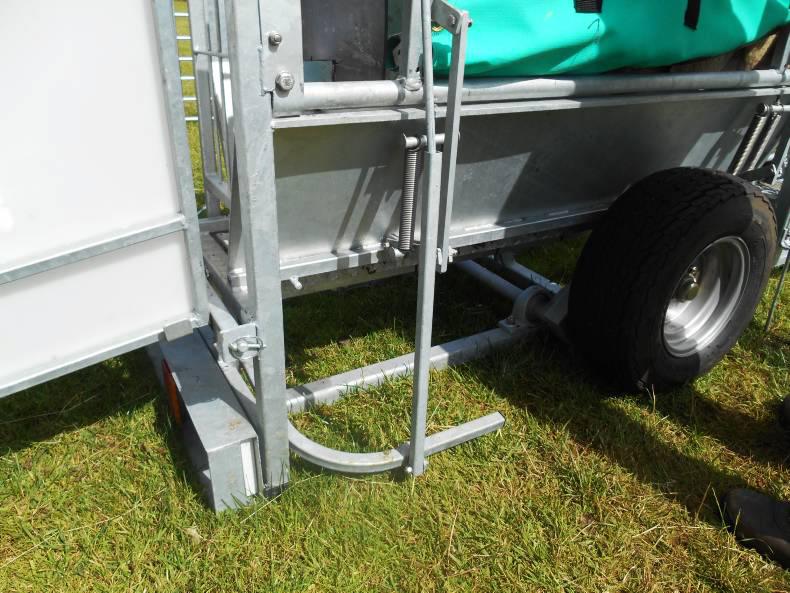 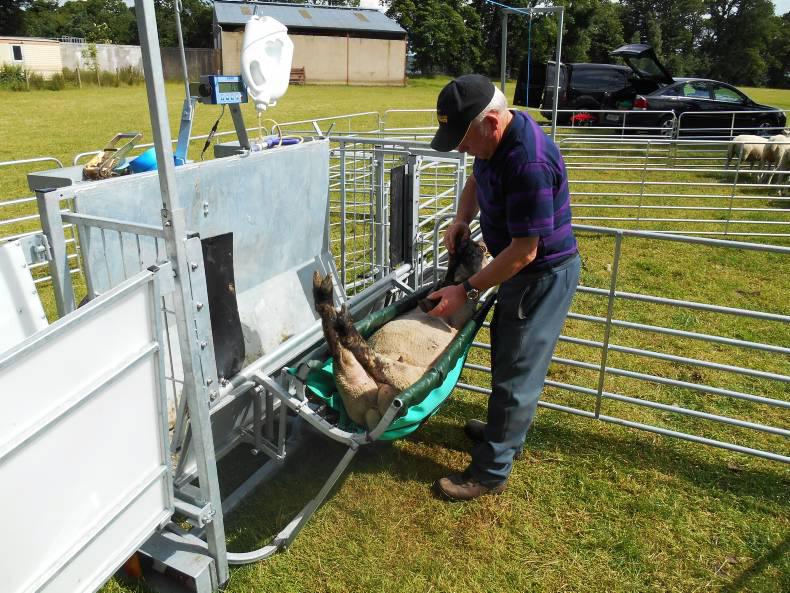 Once a sheep enters the race, she cannot back out because there are gravity controlled non-return gates to block her.

With the aid of a foot-pedal entrance gate, Con can control when a sheep enters the main handling point.

Once on the race, the sheep has full view ahead, enticing her to run into the unit when the entrance gate is open.

The handling unit itself is height adjustable. The main handling point has a weighing system connected to a digital clock (Bluetooth compatible). There is a built-in turn-over crate that Con uses to check sheep’s feet and udders, as well as dose.

He uses this if he is drafting lambs for slaughter or separating cull ewes from the main flock. 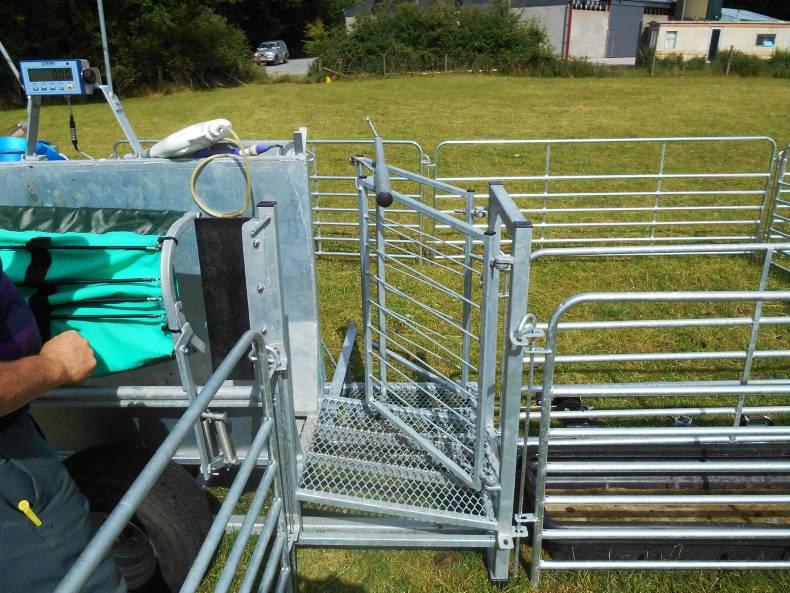 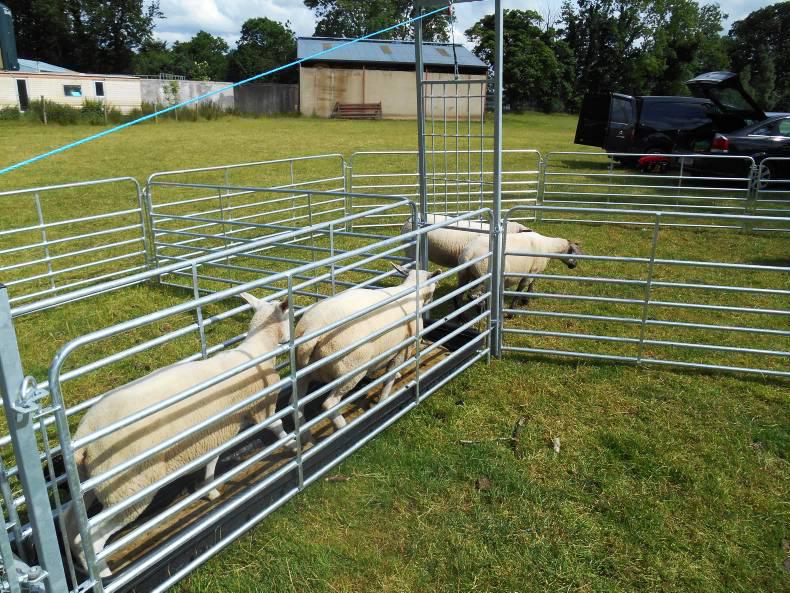 With the three-way sorting gate, sheep can be directed straight, left or right on to the 2.5-metre footbath. Con uses one footbath where three sheep can fit at once. With the aid of a rope, he can open the exit gate from his position at the handling unit and release the sheep as he sees fit.

With any major sheep job, I can save from three hours to half a day because I’m now using a handling unit. It takes me 10 minutes to set up and it’s light and balanced on the road. I would recommend anyone with a number of sheep to consider buying a handling unit to reduce their workload. A handling unit allows me to carry out most of the heavy work with sheep on my own. I use the sheep gates at lambing time for individual pens.

Shepherdsmate is an innovative provider of sheep handling solutions, with their company based in Ballyconnell, Co.Cavan. Providing products world-wide, we are committed to offering our customers the most efficient and cost-effective solutions for ensuring the safety of your livestock while also reducing your overall working time.

We use cookies on our website to give you the most relevant experience by remembering your preferences and repeat visits. By clicking “Accept”, you consent to the use of ALL the cookies.
Cookie settingsACCEPT
Manage consent

This website uses cookies to improve your experience while you navigate through the website. Out of these, the cookies that are categorized as necessary are stored on your browser as they are essential for the working of basic functionalities of the website. We also use third-party cookies that help us analyze and understand how you use this website. These cookies will be stored in your browser only with your consent. You also have the option to opt-out of these cookies. But opting out of some of these cookies may affect your browsing experience.
Necessary Always Enabled
Necessary cookies are absolutely essential for the website to function properly. These cookies ensure basic functionalities and security features of the website, anonymously.
Functional
Functional cookies help to perform certain functionalities like sharing the content of the website on social media platforms, collect feedbacks, and other third-party features.
Performance
Performance cookies are used to understand and analyze the key performance indexes of the website which helps in delivering a better user experience for the visitors.
Analytics
Analytical cookies are used to understand how visitors interact with the website. These cookies help provide information on metrics the number of visitors, bounce rate, traffic source, etc.
Advertisement
Advertisement cookies are used to provide visitors with relevant ads and marketing campaigns. These cookies track visitors across websites and collect information to provide customized ads.
Others
Other uncategorized cookies are those that are being analyzed and have not been classified into a category as yet.
SAVE & ACCEPT
Powered by